Introduction to the project

Tania Bruguera’s powerful, provocative and inspiring new work draws us nearer to those who’ve made this city their home, inviting us to discover and embrace the diversity in our midst. During MIF19, the school offered over 80 classes on a wide-ranging curriculum that includes food, customs, ethics, politics and many other forms of knowledge – classes given by local people originally from countries around the world, from Zimbabwe to Tibet. These were not only instructional lessons, but something more personal and vivid. Each teacher passed on their own experiences, sharing skills, knowledge and culture in a different kind of communal integration and learning experience in the heart of Manchester. Open and free to all, School of Integration fostered cohesion and helped build bridges of cultural understanding – encouraging us to eliminate the idea of strangeness and cherish a plurality of voices, and integrating us with the world.

This was all I knew when I got an email from a recent lecturer asking me if I wanted to participate in this project at the end of May till the end of MIF in July, the project looks really inspiring and I been following Tania's work for years, so I was really happy to accept collaborating on this.

Meetings at the gallery

The first meeting at Manchester Art Gallery, the team introduced the project and informed us with: dates, pay rate, general information. Then Tania described the project, and gives an example, ‘ I am a person who likes to kiss and hug, in Cuba is normal and we touch each other when we greet but in other cultures, they may feel strange when you kiss/hug people’... I felt the pressure. Then we carry on with workshops in groups to make us speak about our thoughts and what we were thinking to teach, the atmosphere was great and the debate looked tense, we were comfortable to speak of our feelings as immigrants in the UK, and it was satisfying.

Some teaching support sessions will be available. And it was recommended to decide the lesson within a week.

The next session a group of 12 teachers were there, and we speak about what we will be delivering filling a form with details and needs for the workshop. Then we were suddenly doing group exercises with a coach, singing, and helping us with presentation and confidence speaking techniques which I thought it was great. For the next session in a few days, I was asked to deliver the workshop at the gallery as training before going away to Spain.

The feedback I had from my ideas for the class was really good,

My idea was to teach History of Spain, focusing on the Civil War and Franco’s dictatorship, making a postcard with screen printing and collage.

This meeting was the gallery space and a small team of teachers were there, three staff members and Tania.

They show us the teaching space and the practice started, an Italian lady was first, she wanted to ask the public to make her questions and choose what they could think it was interesting about Italy, good start. She delivered some of the session and then we give her some feedback. Then we moved to the kitchen space, where a Greek lady was going to pretend to be cooking a stuffed pastry and tell us some history about the recipe. We continued in the kitchen with a Nigerian woman cooking rice with chicken. Finally, my turn to deliver some of my session and explain the project. I brought some postcards and pictures from the archive. They seemed pleased with my ideas.

I was worried as I was going to Spain for two weeks and back two days before the delivery of the session. I have to prepare the images for screen printing and collage and make a presentation.

I use archives when I am looking for inspiration, I am a big fan of photography collections and I spend hours looking. For this project, I made good use of the National Spanish Library photography archive from 1936-1939-1975.

I search mainly pictures of my hometown Madrid during the war and the resistance of the capital against the fascist during two years of intense fight. I looked into the structures made to protect fountains and public statues.

I visited my grandad just after arriving in Madrid on a really hot day.

I asked him if I could record him and ask him some questions, last time I saw him he was speaking a lot about his experiences after the war. But this time I don't think he was ready for it. He is a very nice man and he was telling me some of his stories. But he did not want to speak about the misery, he has no bad words, I feel like he still doesn't think there is freedom of speech and doesn't fully want to speak about Franco. He was 4 when the war started and lived in the countryside in Ciudad Real, two of his brothers die in the war, he was sent to Madrid to a hospital for months,the only food he had was lentils with worms and bread, he never went to school, he always worked with his hands, at a stone quarry, also as a welder, he graduated in the adult school when he was 25 and learned writing and reading. During the war and after the food supplies from the farm were taken from them and few savings they had in republican money was not safe to use anymore..

Now he is showing me a picture of him and some workmates at "El Valle de Los Caídos" monument near Madrid, a monument to commemorate the people who died in the civil war, mainly the nationalist side as well as Primo de Rivera and Franco. All in the same place, in really high rock with a church and mausoleum and a giant cross at the top. My grandad was part of the team building the door of the back of the area.

Postcards from the war, correspondence from son to mother.

My grandad was born in 1932 he was four years old when the war started, two of his brothers went to fight in the civil war on the republican side, and both died. My dad showed me the correspondence from his uncle who died in the war in 1939, writing to his mum and family.

Decided to scan all to be able to translate it and use some of the graphics on the front of this postcards, specially designed with the purpose of war correspondence with encouraging messages to the population.

I felt fortunate to possess these letters and it was such a great inspiration to my project around postcards and the history of my family in the Spanish civil war.

While I was in Spain I read this comic book about the end of the Spanish civil war and whence the republican troops which supported France against the fascist with the expectation to save Spain from Franco and their history about the exile.

While staying in Madrid I visited one of the most important postcards shops in the capital and spend hours looking for various postcards around war and post-war, with stamps included. The archive was amazing but the oldest and nicest postcards were around 20-40€ each and that was my total budget which I wanted to make the most of it. I asked for advice on cheaper options and found some sales and offers. I was especially interested in some of the postcards with the stamp censored CENSURADO and the ability of some writers to create these letters in different angles overlapping each other to hide a message. During the dictatorship, freedom of speech was control and primary subjects of censorship included public display of liberal political ideology, art forms such as literature and film, as well as symbols of foreign, non-conservative ideologies. Communications that where unclear were a hint of a hidden message against the regime. 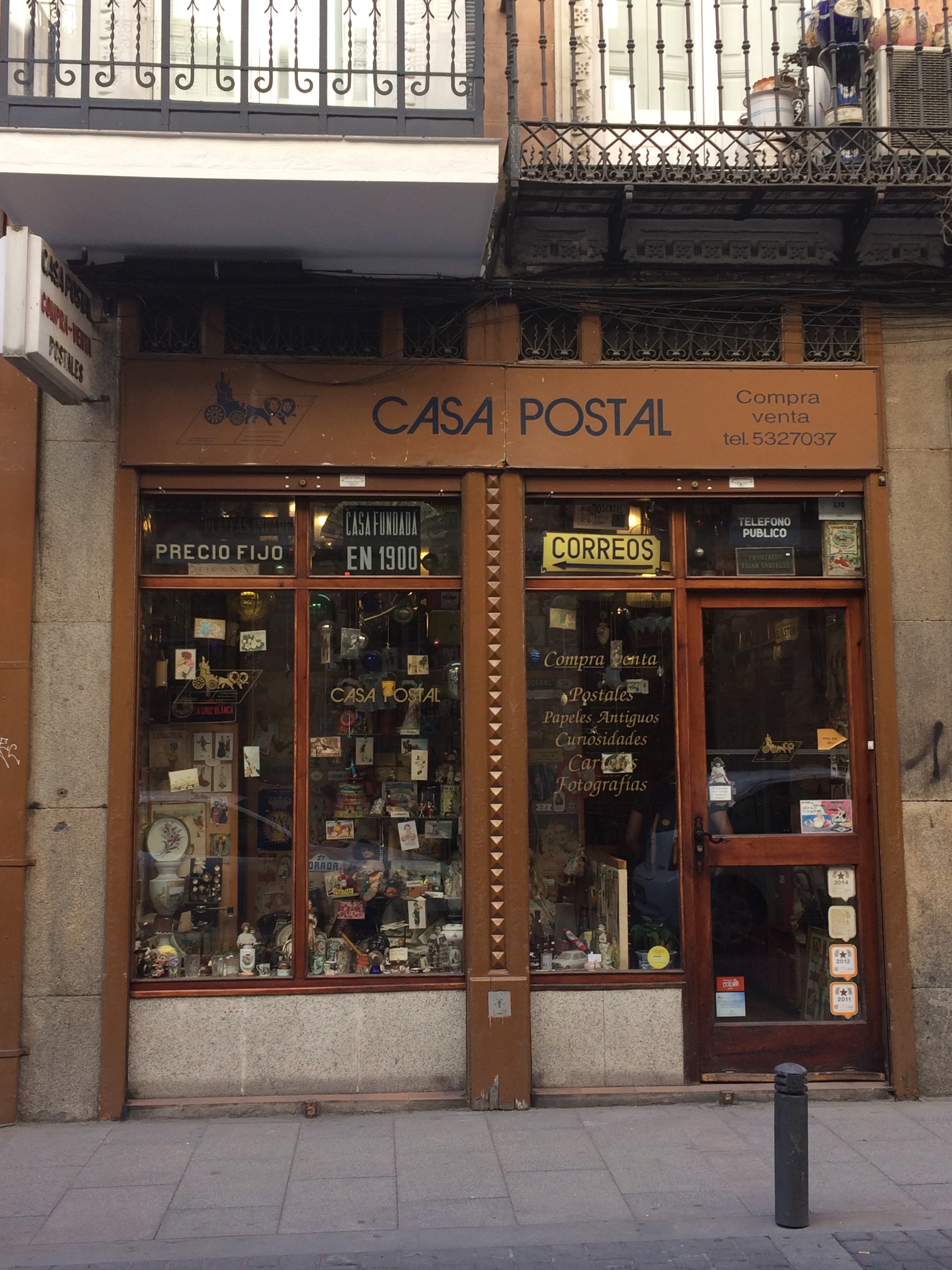 To make this workshop possible I have to prepare 20 images to expose in 10 screenprint frames A4 size to take to the gallery.

With all this collection of postcards and images from my research, I selected a variety of postcards and edit them to screenprint. A mixture of images with stamps from different times in history and some pictures of the conflict as well as some statements. As well I digitally printed around 40 images for collage from the archive.

I plan my lesson in this order:

How to screenprint 5 min

As well I have to produce a presentation regarding the research and some of the ideas I wanted to teach in my lesson. During the workshop, a loop of images from the conflict remained projected in the background. (see below)

Some of the images developed for screenprinting

I took a taxi with some of the materials and got there to prepare the tables and space. A group of volunteers were there to assist and some more staff, but I feel overwhelmed by the general chaos looking for all the materials to be in place and I was not able to give them a lot of directions of how the workshop was going to work, I assumed the staff will communicate with all at one point and that never happened so it was quite confusing. The room was full, 50 people attended the session, I was nervous, I started the presentation and it felt like it was never-ending, I look at my notes when panicking but my eyes did not want to read after the presentation people clapped, I thought I was going to cry. Next step was screen printing but my directions of the workshop may sound confusing for the public and some people asked me for help with printing, I was unable to direct everyone in the same time, the room had 5 tables with 10 people each and 2 screens in each table, then 2 tables for collage and 2 for drying prints, when going around to help to print others were commenting on certain aspects of the history and giving me feedback, it felt really good to do this, perhaps just a bit crazy.

Some of the screenprinted postcards

I am thrilled to participate in this project and it taught me a lot of things, from my family history, my country and the developing of the ideas and workshop. The opportunity to work with a team of professionals from the festival and with an international artist it was an amazing opportunity, it gave me the confidence to believe in me and I am glad that the public was keen to know about my stories, it gives me the power as an inmigrant in BREXIT times.